Judy Doubas formed the idea for Ten for Tamils when she first visited Jaffna, Sri Lanka in October 2014.

Judy writes:
“I was not happy with the way our government treated Tamil Asylum Seekers and wanted to know why Tamils would want to flee a country considered the “pearl of the Indian Ocean”. The civil war between the Tamils and the ruling Sinhalese had ended in 2009, after 25 years of conflict, leaving hundreds of thousands of Tamil widows behind.

“So when I was in Jaffna in 2014, I sought out information about this particular group and was directed to Saroja Sivachandran, a wonderful Tamil woman who has created a group called Centre for Women and Development. The primary aim of this group is to aid these widows in having their land, which is currently occupied by the military, given back to them. This is a long and arduous task. And she has very little funding.

“When I returned in October last year, I spent several days visiting the Internal Displaced Persons Camps in Jaffna, listening to and interviewing the women to find out how I could support them. What I discovered shocked me. These women had no way to support themselves other than doing the odd “koolie” job which paid very poorly. Some days they had no food to eat. The children are malnourished and the women live in despair, with little hope for any change in their future.

“The people in the camps call themselves the “forgotten” people. And when I arrived, my guide greeted me with “welcome to the human Zoo”. The camps have been visited by many dignitaries who promise to help them but never have.

The Ten for Tamils Team

Ten for Tamils would not be able to function without the help of the following people.

JUDY DOUBAS is a Feminist who writes plays about contemporary social issues to give a voice to those who cannot speak for themselves. She has worked as a Psychiatric nurse, a Counsellor, Teacher and Family Worker.

She also agitates for the rights of people to seek asylum in Australia, is a Media Advocate for Family Violence and supports the development of Tais making Cooperatives in Venilale East Timor, in an effort to increase local women’s incomes.

JANET HAY has worked with Asylum Seekers on Christmas Island, Nauru and Manus Island as a Welfare Officer and Education Team Leader. She has recently completed a Masters Degree in International Cooperation and Humanitarian Aid with Distinction. Her Dissertation was titled “To Give or to Lend? Social Business and the Charity Model: Calling in the Generosity in Economics.” Janet challenges the traditional model of charity ie: the giving of second hand goods to the “pitiful down trodden poor people”.

Put in an order, instead, for goods made locally, to create a sustainable income for the people involved. Janet is deeply committed to Ten for Tamils as the project directly supports women being given the opportunity to start their own business.

SAROJA SIVACHANDRAN is a Local Tamil woman from Jaffna who began The Centre for Women and Development, a non profit organisation, legally registered under the NGO secretariat Colombo in 1988. The CWD, aims to address Women’s Rights and to build capacity and empower women in the local community to take part in all the activities.

CWD aims to work with the under privileged , the marginalized, the discriminated and the victimized women and girls and as part of this project, the thousands of widows in Sri Lanka.

The Ten for Tamils project would not be possible with out the support of Saroja and the CWD who are responsible for implementing the programs and supporting the women.

TEN for TAMILS will offer practical assistance including: 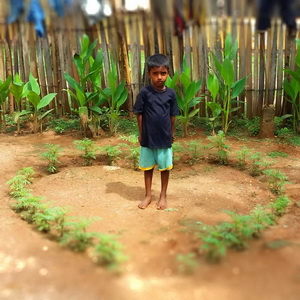